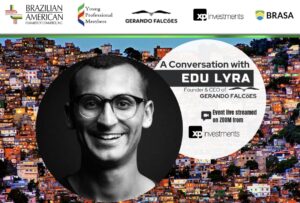 The Young Professionals Committee of the Brazilian-American Chamber of Commerce invites you to watch the recording of this timely and informative discussion with Edu Lyra, Founder and CEO of Gerando Falcões.

Born in a favela in Guarulhos, São Paulo, Edu grew up visiting his father in prison, but also hearing his mother say: “son, it doesn’t matter where you come from, but where you go!”. He then wrote a book called Jovens Falcões, that he sold door-to-door with a group of fifty friends. The profits of the book were used to fund the NGO Gerando Falcões, now a network of non-profits, which serves residents of the suburbs and favelas.

Edu was selected by the World Economic Forum as one of the young Brazilians who can change the world – as part of Global Shapers. He was listed by Forbes Brasil magazine as one of the most influential young people in the country under 30 years old. Additionally, Edu was named entrepreneur of the year by LIDE, carried the Olympic Torch in Brazil, and lectured at Harvard, Babson College, Google, Ambev, Accenture, among others. Edu’s goal is to create the largest network of non-profits on the planet and transform life in the favelas.

This presentation was in Portuguese.

Webinar Registration information:
Free of charge for members and non-members

A Conversation with Edu Lyra, Founder & CEO of Gerando...

A Conversation with Edu Lyra, Founder & CEO of Gerando Falcões